Let me introduce this little idea.
We (Myself and Wendy) have both played WoW since the beta testing, and almost non-stop since the game launch. This is actually more than 5 years now (!). And so, we decided we want something new to do / play together, to have something new and unknown to explore. We decided we wanted to try a new MMO together, to try to have the same feeling we had during the first period of WoW. During our stay together at Wendy's we started to peer at the current list of active MMOs.
Some candidates were:

And so, we decided that we wanted to try Aion. At first we were a little bit divided, as there was no trial, and the game was priced at 50€. We were also a little bit afraid that the game could possibly be too much oriented around the endless grind, as Asian MMORPGs typically are. However, as both Wendy and me have the MUST HAVE NOW-mentality (and also that in this game you can FLY with your own wings!!

), we decided to buy one copy and try it anyway. After much hassle and fiddling to make the account work, we finally had the game downloaded and account ready.

And so, we started the game. At first we was worried that the game would run slow (the game uses CryEngine, a fairly advanced GFX engine as the MMO standard goes), but the engine was wonderfully optimized, and ran at a comfortable 70+ fps on maxed graphics (so if you're wondering if your PC can handle it, the answer is: if it can handle wow, it can handle Aion).

Techical babble aside, once the game started we were both sold. The first impression we got even by just seing the login screen was awesome, and the character creation proved to be very, very satisfying (you can really make a nice character, with tons of customization options (think Sims / Oblivion, but with more)). Together we made our first character, a female Elyos Mage (Eleneza <3). It didn't take much more than an hour after that before we decided to get a second account. We had found our game!

But, what is Aion?

Aion (Homepage) / (Wiki article) is a PvE / PvP / PvPvE MMORPG by NCsoft (the same developer as the Lineage games, Guild Wars, City of Heroes/Villains and others), released September 25, 2009.
The setting is simple: Two races (originally the same one), Elyos and Asmodae live on their own sides of the broken world of Atreia. At war with each other, they are also warring with the hostile Balaur (NPC / PVE only) that reside in the center region between Elyos and Asmodae, called the Abyss. The two playable races are as such the Elyos and the Asmodae, easily recognized by their angelic (Elyos) and demonic (Asmodae) themes.

As it is currently the maximum level (cap) is 50, with additional progression systems (like WoW's old PVP ranks, talent-like system, etc.)
The game itself seems to be balanced PvE / PvP-wise in the same fashion than WoW, with mostly the same amount of focus on each as WoW has (possibly a little bit more PvP-related than WoW, but this is just me speculating).

There are 8 classes in the game, and all 8 classes are equally available to both Elyos and Asmodae. First you choose one of the 4 archetypes, and at level 10 you choose your "real" class, your specialisation so to speak. You can find more information on the website itself, but the classes are as such (with WoW equivalent in parenthesis(of course not exactly the same as WoW, but the closest relative)):

But what about us?

We have just started playing on the Perento server, on the Elyos side / faction. 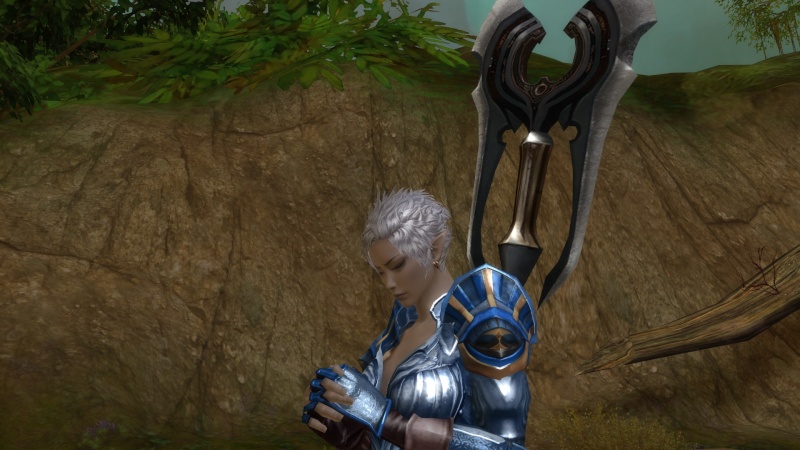 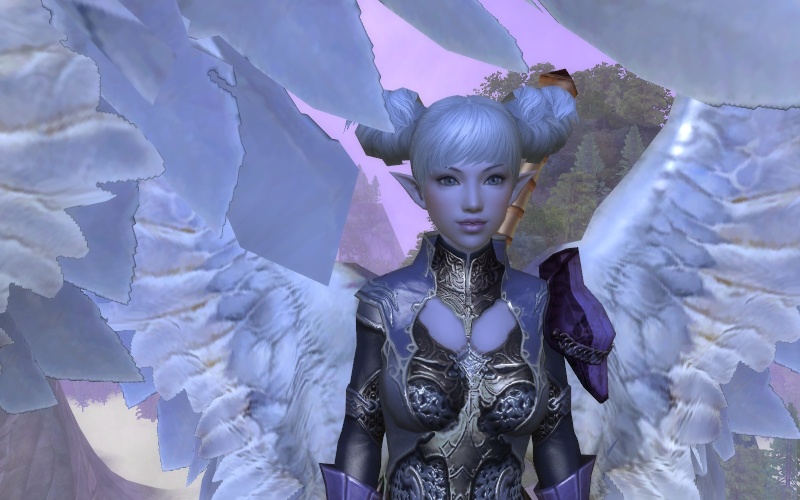 We have made our own guild (in Aion it's called a Legion), called

(of course!) At the moment we haven't yet made a guild emblem / icon, but this will be done in the future (it's really expensive).

But, how do I join you on this fantastic adventure?

Yes, this is indeed a good idea! However, the game is still too new to have a free trial, the only way to get a trial is by referral from someone that has an account more than 3 months old (mine and Wendy's are less than a week old, sorry

). However, some benevolent players have set up a website where you can enter your e-mail, and then hopefully a nice player will send you a trial key, here.

If you feel bold enough you can of course also buy the game directly, either on the official website, or via Steam.

Anyway, that's it for now. I'll try to keep updates in this forum for our progression and exploration, we're still only scratching a little bit at the surface of the game, and there is probably a million things to be learned (which is awesome, it's really enjoyable to not already know everything like in WoW).

You are of course very, very welcome to come join us if you want to, the more the merrier! If you decide to do so, please let us know how you are progressing with that, and if you want to ask any questions or whatnot.

Come fly with us! 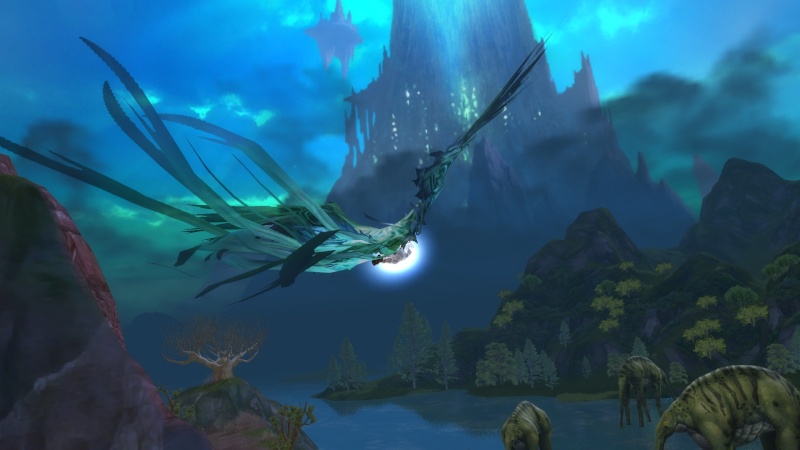 Fredrik really made a nice thread, and if you guys wish to join us, we would be very glad.
At the moment we only play together, we even try to do elit quest alone. It's quiet fun and challenging. We only grouped once.


My impression after 10 days of game

1. The character customisation (after WOW one) is amazingly fun. I've created like 4 or 5 character lvl 1, just for the fun of making them.
I really love how look Elloa, I tried to make her looking as an angel to fit her wings.

2. The graphics. WOW recieve here a big slap in its face. It's amazingly beautiful. Landscape are well done, seem realistic and open. You have a lot of "unused" horizon which just make you feel the world bigger, and more beautiful.

4. Storyline. The storyline is axed arround you and make you feel appart of the game for real. You have cinematics and such for a lot of quest.

5. Game play is well done. Not beter than WOW, just as easy I'd say even if it's different.

Now we are 23. We have done a lot of quest, including elit quest we have done almost all only two. It was fun, and I really stared to appreciate my class wich is a hybrid between a healer and a dps.
If I'm doing an alt one day though, I'll make a cleric so I can see what's doing a pure healer. I had hesitate a lot between those two when I reached lvl 10 and in one way I'm still hesitating in my head : what would have been the most fun :p So I need try both.

I still need to farm materials to improve my craft. Cause now I'm a bit late with this. Can't craft any good potion for my lvl for now.


It's really a game I'd suggest if you want change air ! In three month we will have trial keys to share

Just to add that Margret, Tuukka and Geir have joined us in Aion.

Margret is Kaia, cleric. Tuukaa is Raknash (something like that -_-), templar and Geir is Aean, assassin.

and hopefully we stay in touch on forums and msn

and btw does it cost money to play? i mean like wow?

And yes, it costs the typical 13,99€ / month or something thereabout.

I won't force you to come join, but it would surely be cool if you did! =D Even if it's at some point in the future.

I can share my accompt with you, ask Fredrik about how to download the game and install it for free I'm such a noob with al of this. I'll give you my info then

So you can try when i'm at work :p

i will def want to try and create a character

. But maybe i can try it out after this month? i still have the move and need to unpack stuff and wont have internet for a while.

and i believe i can install it on baby brookans comp. can never be to carefull even if fredrik says it works better

Tell me when it's downloaded and I give you my info

and in 2month and half I can give you a trial key.

You know, I'm half convinced to try it

. Just need to check my budget and maybe I'll join you later 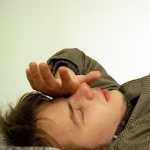 Now Fredrik and I are lvl 28. We have done our first instance three time. We have have been dps and tank-heal. Was super fun.
Geir should catch us soon as he is 21 already !