Whitestar could have a team if 5 of you are interested to participate, just for the fun.

As some of you may know, I am trying to promote eSport within MMORPG. And with that incentive i would like to invite some of the epic guilds and gamers around here for some competitive PvP tournament during CBT5 Saturday evening at 7 CET.

We have a cash prize of 5million gold to the winning team.


The tournament will be structured as this:

There will be brackets, which will contain 4 teams each. Depending on the number of teams that will sign up, we will have x amount of brackets accordingly.
Each team plays one another, in a Best of 1, the winning teams then move on to fight a Best of 3 in semi finals and further to finals which will be Best of 5, to fight the winners of the other brackets A-B-C-D etc.
The winners of the brackets will be awarded points so that the teams can continue.
Each win will grant 3 points and each loss 1 point.
The top 2 teams with most points will then continue to another bracket or semi finals, depending on the number of teams signing up.

The team will consist of 5 members, you can mix your team with any guild and have any random setup that you prefer. I.E. you do not have to be from the same guild to form a team.
Give your team a team name to make it easier, put the name up here or pm me so i can sign you up and put you in a bracket with other teams.


Depending on how many teams will sign up, the tournament will last anywhere between 3-5 hours.
Most if not all matches will be recorded for further youtube'ing and promotion of Competitive PvP within TERA.
Also, we are looking for someone who is/can comment on the matches, either through live stream of his own, or through someone elses live stream - which should be easy to set up. (Please get in touch with me about this)

I will be updating this thread with Brackets, teams and other information.
You can sign your team up untill Thursday 11/04 midnight, 00:00 CET.
Then it will all be put together, organized Friday and ready for tournament Saturday evening.

Short breakdown of what and how this tourney will happen.

Draw: If the Deathmatch timer runs out, it is a draw, no matter how many people are alive on each team.
The fighting area will be pre-defined, anyone who steps out of these boundaries will be disqualified.
If it is a tie for 2nd place with two teams on equal points then whoever the winner was in there fight versus each other will be declared 2nd place and through to the next round. If the two teams drew there match versus each other then they will fight again until a winner emerges.
If the draws will get out of hand, for example 4 teams with same points or 3 teams with same points, the referees will decide who will get to advance.

Winners of the brackets will be decided by most points.
Depending on amount of teams we get, we set up brackets accordingly.

So if Team A wins Bracket A and B for B and so forth.
We end up having semi finals.

ALL FIGHTS IN SEMI FINALS ARE Best of 3, Finals are Best of 5..

Depending on how many teams will sign up, there might be an additional 2 brackets after the initial brackets.
So far, it seems are are getting about 8 teams so it seems like 2 brackets will be how it all will go down.

Please sign up in time, so that we can arrange this and organize this in time and not last second.

There are simple rules that will apply during the tournament.

Usage of the above will result in disqualification.

This whole event will be streamed and casted on the event page that we are setting up now.

Teams and matches will be revealed Friday.

I would like to give a shout out to Deioth and Atra Astrum and Jackie and VoTF for helping setting this up and funding some of the cash pool reward for this tournament. (Perhaps, we will be able to fund another 2 mill to the 2nd place and 500k to 3rd place.) You are welcome to help fund a little bit for the 2nd and 3rd place.


Please sign up your team, either here or through pm to me, and we will make sure to have a great time and enhance the Competitive PvP of TERA!

If i have forgotten something, im sorry, but big kisses to everyone! <3

dunno is 5m gold a lot? If yes then i gues participating get more chance for winning it :p

Great initiative! If this is any indication of the Tera PvP community there will be awesome times in Arborea

5M is quite a load of money but I don't think it will survive the character wipe after CBT5, so you will only be a bloated millionaire for a day or so

Would love to join, but I am way to low lvl

Aww, too bad we don't have full level capped group 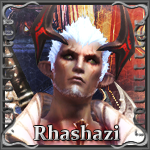